Giving Back to Those Who Follow: the Legacy of a Delt 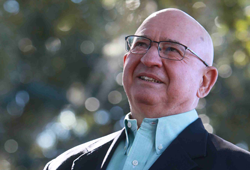 After a nearly 50 year career that is still going strong, 1971 graduate Mike DuBois has ensured that future generations of Delta Tau Delta Southeastern students will benefit from his success, and have access to the same great education that he received. "Not everyone gets the opportunity to have the experience I did," said Mike. His hope is that his legacy gift given through his will - the Michael H. DuBois Delta Tau Delta Endowed Scholarship - will help future Delts become productive men who find their paths to a life of excellence.

Mike had a great time during his college years and has carried his love for Southeastern with him throughout his career and life. To this day, Mike is very connected to his Delta Tau Delta brothers.

Mike was active on campus, serving as SGA president and a charter member of Delta Tau Delta. "I was the charter signatory number three," he proudly notes. He quickly remembers the date of the charter - April 12, 1969. "It was a great time, and I worked with and learned from some great people."

Upon graduation, Mike entered the Air National Guard, where he trained as a pilot and flew F-100s. This led him to a desire to become an airline pilot, but upon his completion of training and duty, the airlines were not hiring many pilots - that's where Southeastern comes back into play. As an Agriculture/Animal Sciences graduate, he went to one of his former professors for help. "I talked to Dr. Owens and he gave me a connection for a job … and I got it," said Mike. This position led to a five decade career in agricultural product manufacturing and sales. Mike has been in sales, marketing, business development and operations positions throughout his career - and he notes, "I still enjoy it!"

But early in his career, Southeastern played yet another role in Mike's world. He was the Director of Alumni Affairs from 1976 to 1979. Again, Mike explains how much he enjoyed being on campus. "I was working with many of the same staff that I did as SGA president," he said. Among his notable accomplishments was a 400% increase in membership and a shift to modernize the focus of the alumni relations office.

Now that he has seen success in multiple ways in life, he wanted to commemorate his legacy at Southeastern. Mike was inspired by the effort he was a part of to commemorate Tom Sharp, who started the process of bringing Delta Tau Delta to Southeastern, with an endowed fund. Seeing the good that this has done sparked the interest to do more. Mike decided to create his own named fund to encourage other Delt alumni to do the same. "If they see my name on this, it may encourage some of my Delt brothers to donate as well," said Mike. Finally, the recent death of a young family member and her memorialization in a scholarship award at another university gave him the push to have a percentage of his estate fund a scholarship that honors two pivotal parts of his life - being a Southeastern student and a brother in the Delta Tau Delta fraternity.

His scholarship for students in good standing with the Delta Tau Delta fraternity may assist them with tuition and fees or fraternity leadership activities.

Because of his scholarship, students will benefit from this scholarship in perpetuity, and Mike DuBois' time at Southeastern will forever be linked with the past and the future.