Sailor, a Gentleman and a Lion! 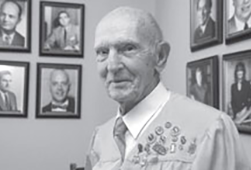 When Fred Trapp graduated from high school in Braintree, Mass., he joined the Navy to see the world. Serving in the Caribbean, this Yankee became accustomed to a warmer climate, and attending a university in the sunny South held great appeal. After his discharge, he enrolled at Southeastern Louisiana College with the help of the GI Bill. He and some buddies who tried out for a football scholarship arrived at Southeastern in a 1935 Chevy. The intense summer heat and Coach Ned McGehee's tough football practices quickly had his friends heading back to cooler climates-but not Fred!

Like many post-war vets who became students, Fred had little money. He lived on campus in the unscreened barracks fighting off the mosquitoes, and was happy to be there. He recalls that during a particularly challenging period, a delay in his scholarship money created a financial crisis. He took odd jobs on campus and recalls going home with friends on weekends because "a guy's gotta eat!"

Fred learned early that the manners of a gentleman opened many doors. He may have come to SLC as a Yankee, but he quickly became a Southern gentleman.

Through the years, Fred tried his hand at various enterprises and jobs. He was ultimately lured away from his position with Shell Oil Co. when he was recruited to become the property man at Southeastern, keeping track of all the College's movable property-fire equipment, vending machines, typewriters, desks, etc. Later, he oversaw the maintenance department until his retirement in 1985. Through all these years, he remained in the Navy Reserve. Fred cheerfully celebrated his 85th birthday in 2009 with family and friends!

From his early years as Southeastern's SGA president, then later as the Alumni Association president and a Southeastern employee, Fred has been a faithful and positive supporter of the students, the mission and ever-growing needs of the University. Fred contributes his time and treasure to Southeastern because he has seen the impact that donors and volunteers can make, especially in tough times such as these when financial support for higher education is decreasing because of state budget reductions.

Fred knows firsthand what a little help from others can do for a college student. That is why he has taken advantage of special charitable IRA rollover legislation to establish an endowed scholarship at his alma mater. Because of his generosity, for generations to come, Southeastern students will realize their dream of a college education and will remember Fred Trapp-a sailor, a gentleman and a Southeastern Lion through and through.