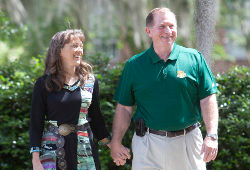 Dr. William Calloway, a Regional Supervisory Public Health Veterinarian with the USDA and 1971 Southeastern graduate, spends each of his days insuring that our food supply is safe. "When you serve your family a piece of chicken or a hamburger, we make sure it is safe." William supervises, either directly or indirectly, scores of inspectors that do their best to make sure our Sunday afternoon barbeques are safe and delicious. Along with his wife, Alice, his career path has been a success in every respect, as well as interesting in its variety.

After receiving his BS degree from SLU in 1971, William worked for a veterinary pharmaceutical company in Baton Rouge. Then, during the 70's, he earned his Master's degree in search of better career opportunities. Even before completing his MS in Biology at SLU, Texas Instruments offered him a position directing their Environmental Services Lab in Dallas.

"Southeastern really was fundamental for my preparation," he noted. For Texas Instruments, he was basically a part of the process for building nuclear power plants. Once the government decided to stop building nuclear power plants, he returned to the classroom to receive his Doctor of Veterinary Medicine at Texas A&M. DVM in hand, "Doc" Calloway came back to Baton Rouge to open a private practice that partially specialized in race horses. After nearly a decade of that, the USDA opportunity opened up, and since 1989 he has been making sure our food is safe.

With a long and varied career, one might expect "Doc" Calloway to have been too busy for much else. Fortunately, he had a little extra time. William reenacts turn-of-the-century medicine at a variety of events with his own persona and set of tools that no one today would want to have used on them. Along the way, he and Alice met participating in historical reenactments and the rest, as they say, is history.

Each person leaves college with some fantastic memories, William notes the many mentors and friends that he developed while here, including Hank Ziller, David Shepherd, and Larry Crain. "These people served as true mentors and my relationship became that of a lifelong friend with these gentlemen," said William.

While William knows that the academic side of life brings great impact, he also noted one very fond memory that was markedly not academic. There used to be a bus service that ran from Denham Springs to campus. William was one of the riders. He fondly recalls a never-ending bourre game that started on the bus coming in, carried on each day between classes in the Student Union and continued on the way home. "Someone would always keep tally and you came in when a class was over and left when you had class ... then picked right back up on the trip home. The camaraderie which that built was great."

As retirement sits just around the corner for the Calloways, an interesting thought came up in a conversation one day. "Our parents are considered 'The Greatest Generation' because of their legacy of the enormous impact they had on the middle of the last century, from the Depression to WWII, to the post war decades. What is our generation's legacy going to be?" With the desire to do well for others and demonstrate what the Boomer generation legacy could be, William and Alice have committed a portion of their estate to the universities that formulated them as people. They also are regular donors on an annual basis. William pointed out that, "We've been very fortunate and we hope to share that with others and ensure that the places that helped us get where we are continue for future students."